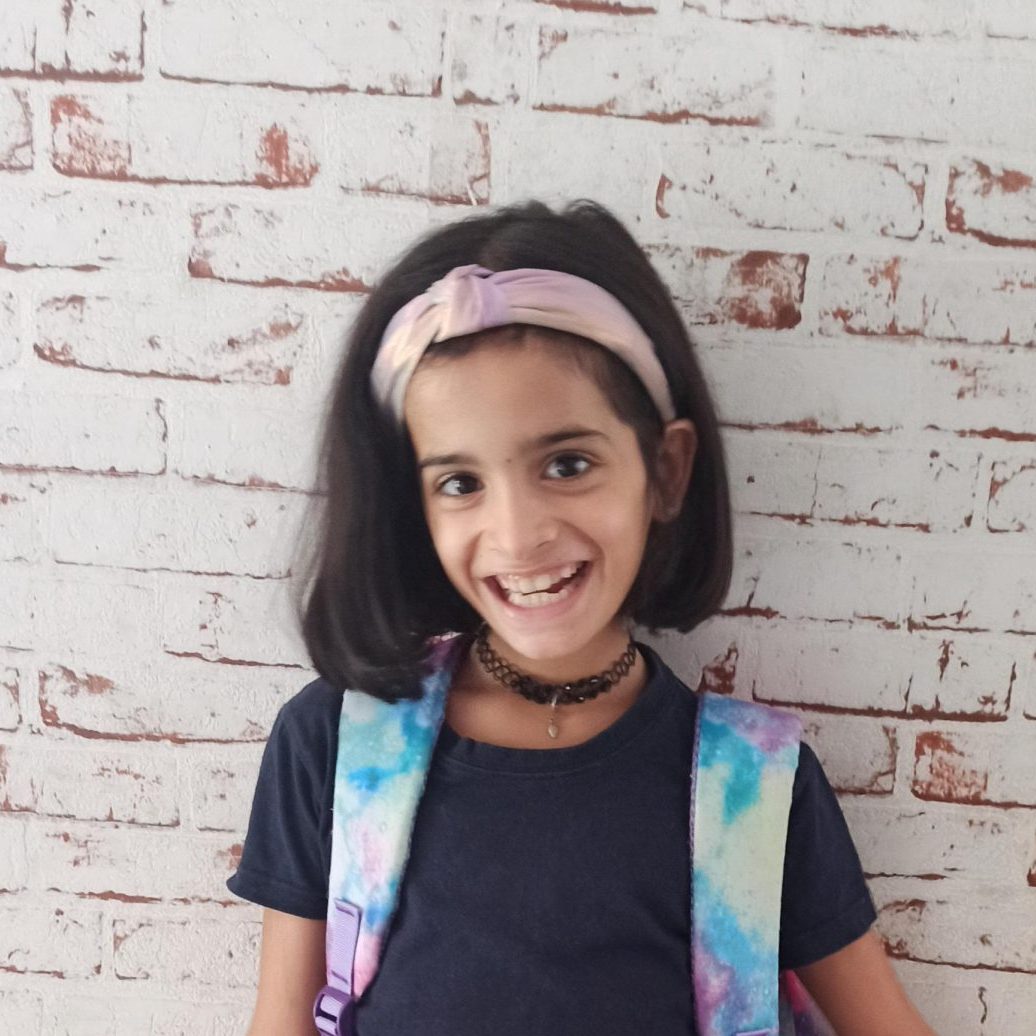 Currently Delfi is 9 years old, with a diagnosis of Propionic Acidemia (a metabolic disease). We came to Ramón on the recommendation of a physiotherapist here in Uruguay, at that time she was 1 year and a half old, she did not walk, and she did not have head support.

As soon as they told me about the Cuevas Medek Therapy, I started researching out what it was about and with the little I read I knew I was on the right track.

We contacted CME team and 3 weeks after we were traveling to Chile. We were very nervous because it was all new for us, but the warmth of Claudia and Ramón gave us the peace of mind that we were in the right place.

On our first trip we went for 15 days and in the first session she managed to stand alone in Ramón’s palms, we could not believe it, it was the first time we saw her standing alone floating and being free. We returned from our first trip with Delfi managing to sit alone and being capable of holding her head. And so we began to travel two to three times a year, each trip was a new advance, she was already able to walk with help, she was capable of sitting down, she crawled…. until one day while here in Uruguay she started walking alone, yes alone! All the effort was worth it, Delfi managed to be free, walk by his own means and begin the free path, Ramón always believed that it was possible, he always gave us the hope that this would happen, that is why we decided to go to Chile to thank them for so much and we showed up one day as a surprise at the office, no one there knew of Delfi’s achievement yet, until we arrived, Claudia opened the doors for us and she broke in tears of emotion, until the meeting with Ramón who was sitting in another session and then he saw her enter and was thrilled but not surprised because he knew she was going to achieve it.

Cuevas Medek thank you so much!! Always in our hearts. 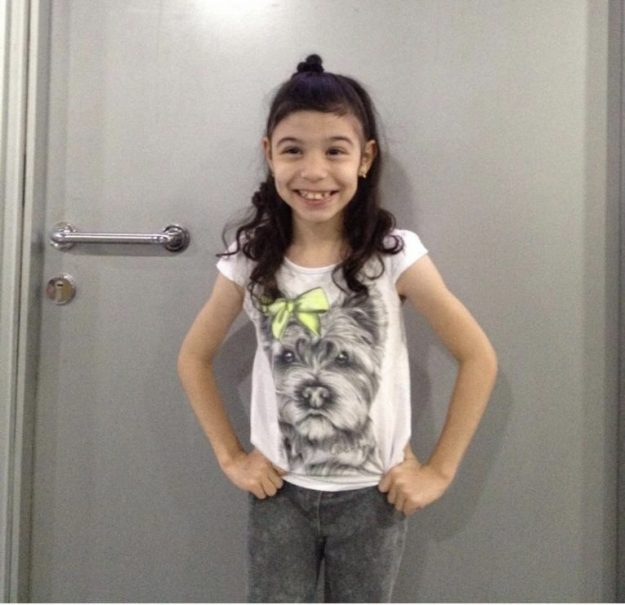 The Brazilian girl Isabela Scomparim Sueiro is known where she lives as the “little great warrior”. Since she arrived in this world, in October 2009, her days were full of struggle, but of many victories too! Isabela was born well and healthy, but when she was one week old, it was discovered that she had a cardiac malformation called “coarctation of the aorta”. Her health condition deteriorated rapidly and at ten days of life she underwent urgent cardiac surgery. Due to the lack of adequate oxygenation at the time when she had her special little heart operated, Isabela had a large brain injury as a sequel, predominantly on the left, in the motor and language area, causing a global delay and impairing all her movements . When she was seven months old, she was diagnosed with Cerebral Palsy and the parents immediately started early stimulation programs, going through some therapeutic methods until just before completing one year of life, they were introduced to the “Cuevas Medek Exercises” method. In a short time of work, motor gains began to appear and happy with the results, the family continued to bet on the method. In December 2012, when Isabela was 3 years old, the family managed to bring her in for her first intensive treatment with Ramon Cuevas at the CME Center- Chile. The results were amazing. In addition to many gains in the motor and balance, Isabela also showed gains in communicative and language functions and a surprising gain in feeding functions, becoming able to chew and swallow solids and grains without the choking that was frequent before. These “side effects” of CME therapy have always drawn a lot of attention in Isa’s picture. As the motor functions developed, many cognitive, psychological and social gains were also being noticed. Between December 2012 and January 2020, Isabela has already undergone another 60 weeks of intensive treatment with Ramon Cuevas in Chile.

The family saw Isa’s story completely change. At 5 years of age, she acquired independent walking and full sphincters control. Gradually, she gained autonomy in various activities of daily life. she is now able to jump, run, overcome obstacles and with each cycle of intensive treatment she continues to show many gains. At the age of 6 years, on the recommendation of Ramon Cuevas, she underwent a gradual stepwise fibrotomy surgery in Spain using the Ulzibatt method, and with the stretching of the tendons, it was possible to advance even more in the global motor part and balance. From the point of view of communication and language, speech and language difficulties were also gradually being overcome during the CME treatment and today, at 11 years old, Isabela speaks, reads and writes normally like other children of her age. Her story can be followed by the social networks “Wings for Isabela”, which bring videos, photos and reports of the evolution of this little girl, who flies ever higher. *Due to the Covid19 pandemic, Isabela’s treatment was paused, currently only with Home Program exercises, but we hope that it can happen again as soon as possible, the reopening of the Chilean borders and the reopening of the CME Center Chile clinic. 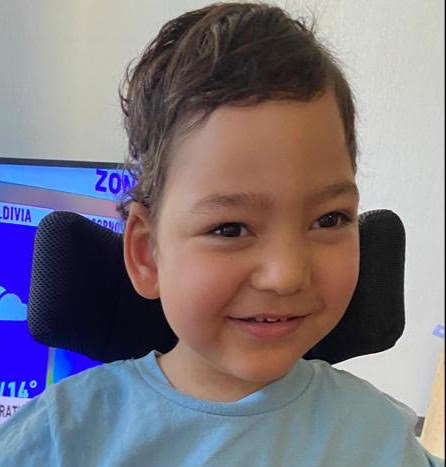 Samuel was 28 weeks premature, he was born by emergency cesarean section due to bradycardia caused by the return of the umbilical cord. Due to her prematurity, he presented respiratory problems for which he required resuscitation, after which there was a grade 4 intraventricular hemorrhage, the most serious, which involves various parts of the brain. This bleeding obstructed brain ducts, producing hydrocephalus as a consequence, which required 8 brain interventions to control it. Then at 6 months he presents infantile spasms diagnosed as West syndrome, a rare type of epilepsy that causes a significant setback in psychomotor development in children. He was treated and ending up in a difficult to control refractory epilepsy, severe hypotonia and many drugs … obtaining not very encouraging prognoses with which to fight!

Despite everything, Samuel eats by mouth, does not use oxygen, and in his own way knows how to communicate with his environment. In the search for therapeutic options to help him in his development, we found a great therapy called Cuevas Medek exercises and its creator Ramon Cuevas who welcomed us in a loving and optimistic way accepting the challenge! Therapy in which Samuel against all odds responds to his stimuli that are aimed at challenging his brain. Since he was 8 months old, Samuel performs these exercises in which he has developed strength at the trunk and head level, managing to maintain his posture, load weight on his limbs, giving the expected response in things that for his diagnoses are impossible for medical criteria! We still have a long way to go, so we keep working and challenging that brainiac who, thanks to this wonderful therapy, continues to stimulate and store information that will surely flourish later! 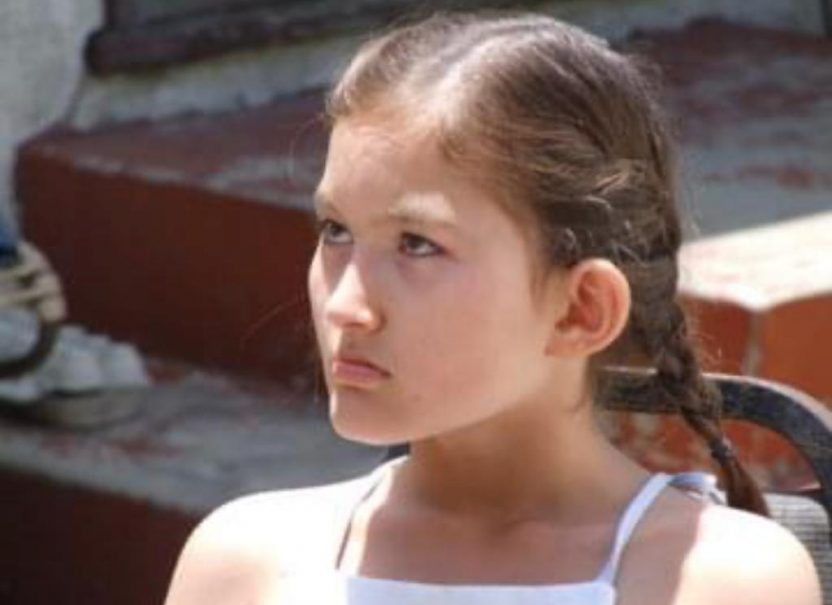 She began CME® Therapy at the age of four and a half years old (in 2002), with the diagnosis of congenital cerebellar hypoplasia and deafness. To understand better Teya’s case we will briefly explain the cerebellum characteristics, information adapted from the NINDS web page:

“The cerebellum is composed by two large hemispheres, and is located in the inferior posterior portion of the head, directly dorsal to the brainstem and pons, inferior to the occipital lobe. Cerebellum who means “little brain“ in Latin is a region of the brain that plays an important role in the integration of sensory perception and motor output.

Many neural pathways link the cerebellum with the motor cortex which sends information to the muscles causing them to move, and the spinocerebellar tract which provides feedback on the position of the body in the space or proprioception.

The cerebellum integrates these two functions, using the constant feedback on body position to fine-tune motor functions. Because of this “updating” function of the cerebellum, lesions within it are not so debilitating as to cause paralysis, but rather present as feedback deficits resulting in disorders in fine movement, equilibrium, posture, and motor learning”.

Teya was under the health care system in her country since a very early age, receiving all the necessary services including conventional physical therapy, and during the previous months before the beginning CME® Therapy she was receiving training to use a walker frame.

Furthermore the mother was advised to apply for a wheel chair, because none of the professionals involved in Teya‘s care considered her to be a candidate for motor independence, probably due to the severe diagnosis and poor aging-developmental-evolution.

But the mother had the courage to disregard standard motor therapy and to find CME® Therapy, and decided to make a big effort to bring her daughter to Santiago, Chile, to take intensive CME® physical therapy with Ramón Cuevas.

In the initial assessment of Teya in August 2002, she stopped getting 3 or complete response in item “28: Standing posture by hands on wall”. She got a “1 or minimal response”; because she was afraid to keep standing position only by hands on the wall. This item needed the basic balance control response of keeping the center of gravity inside the base of support without the “grasping” compensation, which is the first immature reaction that motor delayed children do in order to keep standing posture and taking steps.

Teya was never before placed in a standing position without grasping a solid support. In item “32: Steps by one hand-arm horizontal” she got a zero and then also a zero in item “34: Standing posture free”. Her final motor level from assessment was equivalent of 10 month of age, being 4 ½ years old.

Luckily, since the first set of intensive therapy sessions Teya showed good tolerance to the new therapy responding very well to the exercises, but due to her size and total lack of control of balanced reactions, it was very hard for the mother and for the therapist to provoke functional responses holding such a tall girl by the ankles.

However, it was a worthy effort because slowly but steadily Teya never stopped progressing since the beginning of CME® Therapy, and currently she can stand up from the floor by herself, walk freely on the street almost an unlimited distance turning to any necessary direction with functional balance control and step up and down small stair cases.

Teya is still dealing with severe cerebellum atrophy and deafness and is not completely independent yet, but considering the way in which she manages strolling around after the last set of intensive therapy (March 2006), the option to become totally motor independent despite the diagnosis is increasing every single day. 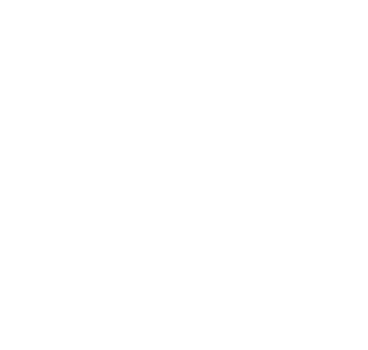 0
Your Cart
Your cart is emptyReturn to Shop
Continue Shopping